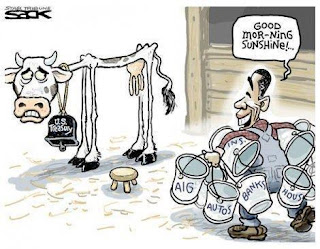 Its election season which means every few hours a graphic or post like the one above pops up on my Facebook news feed.  As a native and resident Texan whose friend list is full of other Texans, almost all of the political posting falls somewhere along the spectrum between Obama is the anti-Christ and Obama wants to eat your babies.

To say the least there’s not much in the way of diversity of political thought ‘round here. That’s okay though.  As I’ve said before on this blog, political views are determined mostly by geography. You can’t necessarily hold the geographical group think phenomenon against people.

Now back to my picture.  See anything wrong with it?  Nobody on the Facebook thread that I copied it from seems to.  Instead, there’s just the usual chorus of people piling on with comments like “So True!” and “Amen!” and "Damn socialist!"

It should also be pointed out that several of the people commenting on the thread are pretty engaged politically.  So what’s wrong with the cartoon?  Well, everything.  Literally.

Let’s look at each bucket in turn:

AIG
The AIG bailout occurred on September 16, 2008, three and a half months before Obama took office.  The federal government, under president George W. Bush, allocated $85 billion of U.S. Treasury funds so AIG could honor it’s collateral obligations. (Most of that money was paid to Goldman Sachs incidentally.)

Banks
The Emergency Economic Stabilization Act Of 2008 (aka the bank bailouts) was signed into law in October of 2008, at the request of the George W. Bush administration. $700 billion of U.S. Treasury funds were allocated to purchase toxic assets from the too-big-to-fail banks.  Again, two months before president Obama took office.

Housing
I can only assume that this one is supposed to represent the collapse of the housing bubble.  The housing bubble began to deflate in 2007 and the volume of subprime mortgage lending peaked between 2004-and 2006.  By mid to late 2008 the U.S. economy was in free fall, soon to be followed by the global economy.  Once again, all of this occurred before Barack Hussein Obama became president.

Autos
The initial auto industry bailout was initiated by president George W. Bush in December of 2008.  $17.4 billion of U.S. Treasury funds were allocated to prevent GM and Chrysler from going into what president Bush referred to as “disorderly bankruptcy”. Here's his speech announcing the bailout.  Obama did expand the auto bailout later in 2009, so we can at least give the Obama-hater who drew this cartoon a little credit there.  But once again, the initial policy was implemented before Obama became president.

There’s also a bucket that says “Ins.”.  I have no idea what that is supposed to be so I won’t comment on it.

So every single policy or event that this cartoonist is trying to attribute to Obama actually occurred while George W. Bush was president.  You try to point this out and without fail the reply is “When are you people going to stop blaming Bush!”.

If this type of thing was a one-off occurrence I wouldn’t have bothered talking about it here.  But it’s rampant. It’s every day, all the time.  And I offer it up as further evidence that right wing, Obama-hating America lives in an alternative universe, an information bubble that is impervious to basic, factual understanding of real life, verifiable events.   As bit of a political loudmouth I feel like I’m in a constant game of whack-a-mole with the phantom creations of the conservative echo chamber.

I’m only 35 years old so maybe my historical sample size is too small, but the level at which this president gets blamed for all of the disastrous policies and consequences of his predecessor  feels unprecedented. The blind and hysterical hatred that is directed at him is wildly disproportionate to his accomplishments or lack of.  Regardless of one’s political leanings cartoons like the one above shouldn’t be going viral on social media.  Even a casual familiarity with the news would be enough for anyone to quickly see how ridiculous and misleading it is.  But here in the land of mass political amnesia, with our oh so selective interpretation of reality, this thing becomes gospel.

Regarding the person who posted this on Facebook, I kindly pointed out the inaccuracies and said what I often say in these cases:  If you guys are upset with stuff that He Who Must Not Be Named George W. Bush did why don't you just say so and use HIS name and put his picture on your cartoons?  You can imagine the response I got.
Posted by Ben There at 6:12 PM