I'm long overdue here, and I'm back.  Not because I have anything profound to share this evening, but to see if I still know how to work a keyboard for anything longer than a snarky Facebook post.  That is what my political and social commentary has devolved to. Never underestimate the fun that can be had alienating friends, ex-classmates, and co-workers with your outspoken political opinions.

We recently fulfilled a dream that was in the making for the past decade or so.  We have long wanted to go to Italy but until the last few years my wife had issues that prevented her from travelling.  Finally, three or so weeks ago, we made our first journey across the Atlantic.  From Fort Worth, to Amsterdam, to Italy.  We spent about two weeks there, with the time almost equally split between Venice, Florence, and Rome. 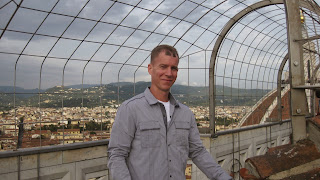 Some random thoughts and observations from our travels...

Firstly, Ben's body does not respond well to rapidly crossing multiple time zones in a short period of time.  Circadian rhythm disruption, also known as jet lag (but I hate that term), was a real bitch. It affects everyone differently, and apparently it affects me quite severely.  This makes sense because I had sleeping problems up until my mid twenties which I eventually resolved by keeping a pretty regimented go to bed and wake up schedule.  I learned some things to help next time though; primarily that melatonin is my friend in dark times. (See what I did there?)

Secondly, I tried to keep my expectations low for this long awaited adventure.  To be clear, I expected it to be great but had no specific expectations about how things would be.  My only preconceived notion was that I expected to like Venice the least.  What was I thinking?  Venice was my favorite. There is simply no other place like it in the world.  It's filled with tourists but there's a valid reason for that.  It's magical.  Saint Mark's basilica was a standout for me.  I'm not religious, I sure couldn't be classified as Christian, but I was filled with awe and my eyes filled with tears when I stepped through the doors there.  I can't explain it but that was a powerful place for me.  A dozen basilicas later I had sort of grown immune to their splendor, which is a shame.  But Saint Mark's was my first, and I'll never forget it.

Thirdly,  I expected people to speak more English there than they actually did.  Now how stereotypically ignorant American is that?  Guilty as charged. I just figured with millions of tourists flocking there, so many English speaking, that it would prevalent.  It was not.  We had many experiences dealing with people who do not speak our language, which can be both fun and frustrating.  I should have taken the time to learn some basic Italian phrases.

Fourthly,  If you ever go to Florence, climb the stairs to the top of Giotto's bell tower at the Duomo.  The views of the city are breathtaking and the climb up will take your breath away also but no worries.  That was another highlight of the trip for me.

Fifthly,  To paraphrase both my wife and mom "boy, the Italians make us look like slobs".  Now I can't get into the pointy shoes and skinny jeans look but there is no denying that they take much more pride in their appearance in public than we do here in America.  What happened to people giving a shit?  I'd like to know.  People are dressed nice and you cannot find an overweight person.  How does that work in a land where everyone eats pasta, gelato, and wine all the time?  Another clue that the American food/health system is freaking scam.  I'd be embarrassed to walk into a Chili's or McDonald's with a person from Italy. Or a Wal Mart.  I'm just saying.

Well...I could certainly go on.  But that regimented bed time thing is kicking in and I will conclude by saying that I feel like a person changed for the better by having had this experience.  Sadly travel has become yet another status symbol in American culture and is possibly a little too hyped and glorified by people who feel the need to escape their normal life or just feel more special than people not fortunate enough to travel.  However, I think anyone who makes it a priority could do it.  And at the risk of adding to the cliché chorus, they should.  If they can.  It gives you a broader perspective and that's never a bad thing.  And I'll practice what I preach as I'm looking forward to making another journey across the pond in another year or two.