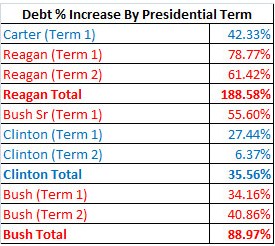 I created these two charts out of curiosity and really just as a reference for myself but thought I’d go ahead and publish them here.  This is the United States and the president is not a dictator which limits the usefulness of a simplistic comparison like this but it is still interesting and instructive. The president is the single most powerful individual in government.  They set the tone and provide the leadership that moves policy one direction or another.

Since republicans are breathlessly criticizing the president for increasing the national debt and claiming, as usual, to be the party of fiscal responsibility, this data seems especially relevant.  To put it simply, there is no historical basis for giving the republican party any credibility on the subject of decreasing our debt.  If past performance is any indication of future results, we should expect the opposite.  At least over the course of my lifetime debt has grown much faster under republican presidents than under democrats.

Reagan is the one who really jumps off the page here; the deified standard bearer, universally praised for being the ultimate crusader against big government, and yet, no president in recent history has even come close to exploding the national debt in the way he did.  More than just an actor, Reagan must have been a master of mass hypnosis, as even in death millions of Americans have a completely inaccurate view of his presidency.

The fact that the hero of the American right is someone who managed to preside over a debt increase of 189% tells you a lot about the modern American right.  I think it's no coincidence that this hero was a professional actor.  He ushered in the ultimate political con-job, “trickle down economics”, a wet dream for economic elites that was so cynical even George H.W. Bush referred to it as Voodoo Economics. It almost feels like a cruel joke that a republican presidential candidate is able to sell this same failed formula thirty years later.  I am continually amazed at how there never seems to be any real political consequences for republicans when their ideas and policies fail miserably.
Posted by Ben There at 8:13 PM